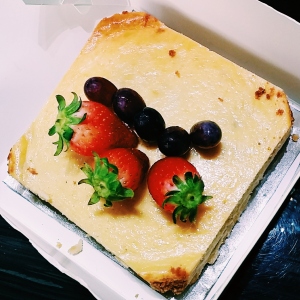 Its Banana Cheesecake! Oh my che che, oh so creamy.
This is a legit banana cheesecake.
Can you imagine banana puree with cheesecake? It’s not overly creamy like New York Cheesecake, or taste gelatinied like Mango Cheesecake, not as fluffy like Japanese Souffle Cheesecake, but I would say, a hybrid of the above. It is slightly fluffy because it uses whipped stiff egg whites which provide the lightness.  Its creamy because I creamed the cream cheese and sugar for at least 5 minutes till they are fluffy.
Mum tried the cut our edges and complained that it tasted nicer than her birthday cake which was a toasted black sesame cake. It’s okay because I am going to make up for that with more bakes. hehehehe
I would considered this product as slightly healthier? Because it is largely sweetened by bananas, which are the highlight of this recipe. The end result is just amazing. It was browned nicely, not overly light in colour, neither it is overly browned. However, it cracked. and my heart sank.
Who likes it when your cheesecake cracks and this is for my sister’s friend. I needa do something about the cracks and there you have it, strawberries and grapes covering the ugly flaw.
To make the strawberries stand up without the use of sugar syrup, Mum provided me with a very clever method- by using a toothpick. It was really useful and really helpful. #baking101
This recipe is slightly adapted from anncoo journal. http://www.anncoojournal.com/2011/07/banana-cheesecake.html
XOXO,
Jiapei

The pain, the love, the motivation.