Today, Mama and I decided to cook 当归鸡汤 for dinner. It’s Saturday and yes, we didn’t go out for dinner because Jiejie went to work again and we didn’t want to waste money to go out. Also, going out means eating unhappily 😦

I love cooking at home but today, Mum cooked the dinner. We use chicken broth and ahh that aroma! We topped it up with some expensive chicken drumsticks that auntie bought for us. It’s some kampong chicken which is organic and free-range? I don’t know but they do taste more flavorful than the normal sakura chicken Mum always buy.

So heading to the broth, it is cooked with 当归， 红枣, go ji berry and another herb which I forgot. It gives it a nice herb-smell without being overpowering. Maybe because I like 当归 and 红枣 that’s why! To add some kick to the broth, LET’S PLAY SOCCER! Haha, Just kidding…. We added auntie’s homemade 米酒 (Rice Wine), Dom (郎酒） and Wingcarnis. This three wine makes it so dang! Oh My! I can eat this everyday you know! XD 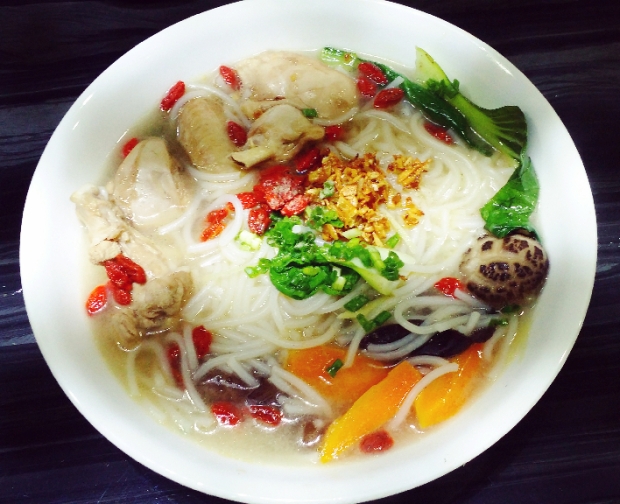 It is a late post but who cares! Today, I made homemade Miso Chashu Ramen for daddy and mummy. Jiejie’s working at Nene Chicken again and it’s the three of us for dinner so yep, whipped up a meal for them. It wasn’t easy. Cooking homemade broth to homemade chashu to homemade noodles. Yes, HOMEMADE NOODLES with my new Joyoung Noodle Maker. Well, I was happy that I defeated 70% of China’s users because I succeeded in my first try but failed at my second try. Maybe because I added wholewheat and bread flour and caused it to screw up. The noodles were so brittle! Not enough water I guess! Fortunately, we still have the first batch of noodles which tasted awesome!

Well, this wasn’t the first time I have made homemade Chashu but tried it out with a new recipe. I added more sake and mirin than the previous time and did not add that much water. Yes, it got more flavorful than before! The recipe can be obtained from Serious Eats! Their guide to Ramen is really detailed!

Following up, my homemade miso broth. My first time cooking miso because I always thought my parents didn’t like miso because Ajisan simply just make them too salty for their liking. However, fortunately, they actually like them and we finished all the soup! Yumyum. Well of course, it’s because Mum helped me to prepare a pork broth. That’s the key you know!

Now, Onsen Egg or soft-boiled egg or whatever you call it. The egg isn’t marinated like outside because Mum didn’t want to so we just boil it in water for 5 minutes and 15 seconds and tadaaaaaa, magic

Toppings were simple, some wood-ear mushroom aka my favorite, some beansprout, seaweed oh oh oh and my homemade garlic-sesame oil! Try it out someday! Just fry some garlic, obtain the garlic oil, mixed it with equal amount of sesame oil and add togarashi powder, chilli powder as well as sesame seeds! That aroma… Ahhhhhh

As usual, this post is written for myself and if you want to read, go ahead! 🙂

The pain, the love, the motivation.